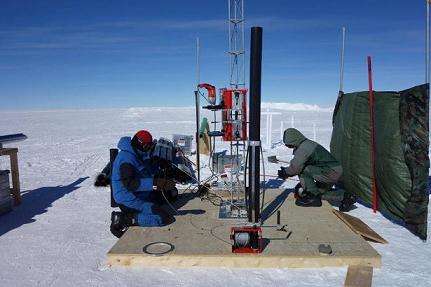 Why did the rate of glaciation suddenly slow down about a million years ago? Perhaps because of a drop in carbon dioxide which has modified the response of the Earth’s climate to orbital variations of the Planet. The only possible verification is in Antarctica and will probably come, initially, from Subglacior, a probe which dates the ice in real time, avoiding coring, and which will attack the Pleistocene, between -800,000 and -1,500 .000 years.

A machine 15 m long and 12 cm in diameter will soon be ready for work in Antarctica, at the Concordia base, and will profoundly change the way of studying paleoclimates. Subglacior, that is its name, is a probe carried out by the CNRS and the LGGE (Laboratory of glaciology and environmental geophysics), as part of a project within the International partnership in core ice science, which brings together 23 countries. At the end of the drilling head, it can extract the ice and carry out on-site analysis in real time using its laser and spectrometer. The device, miniaturized to the point of only 5 cm in diameter, measures the proportions ofwater, information which provides information on the temperature at the time of ice formation and on the methane content, a key parameter of the climate of the time. The results are transmitted to the surface, as well as ice chips, which can be analyzed later.

The advantage of this mini-drilling, which can go down to 3,500 m, is to be fast. It can be carried out in two or three months, a season of work in Antarctica, whereas a conventional drilling, with extraction of the sections of the carrot, takes several years. “If everything works perfectly (which is not certain), Subglacior [can]  drill up to 3,000 m in 15 to 20 days,” says Jérôme Chappellaz , researcher at LGGE and one of the project managers. Installation included, we arrive at a month. Multiply by two if all is not well and add a month of security to deal with the vagaries of Antarctica. With a core drill, count one season for installation, another to descend to 700 m and three others to reach 3,500 m.”

Change of equilibrium in the Earth’s climate during the Pleistocene

The probe with real-time analysis changes everything to get old, therefore deep ice. The movements within the Antarctic ice sheet are indeed complex and the ice mixes, even at great depths. They can also melt on the rocky base, sometimes hotter. To find an area that has remained intact, the only solution is to carry out core drilling in the places that are supposed to be suitable. They are found by radar exploration, from planes, but success is never guaranteed. In case of a bad pick, you have to start again and it would take many years. Subglacior will find the right place much faster.

Its first mission will focus on the period from 800,000 to 1.5 million years and will consist in elucidating a mystery of paleoclimatology. Around the middle of the Pleistocene, about a million years ago, the Earth’s climate underwent a major change in rhythm, as evidenced by various climate records. While glaciations occurred approximately every 40,000 years, their frequency has dropped to one every 100,000 years. The course and the causes of this modification remain enigmatic.

Subglacior to analyze the oldest ice in Antarctica

“The forcing due to variations in the Earth ‘s orbit , the climate began to respond differently, with another rhythm. There is therefore something in the terrestrial environment which has an amplifying effect in the face of this external factor. The assumption is that the CO2 content of the atmosphere has decreased, crossing a threshold value, explains Jérôme Chappellaz. This relationship between forcing and reaction is what we call climatic sensitivity. A matter of importance today.” Answers surely lie deep in the ice sheet Antarctica, in regions where the oldest ice has not yet melted and has not mixed.

Subglacior’s development has mobilized since 2011 around twenty researchers and engineers who have succeeded in holding the laser spectrometer in the near and middle infrared in a tube 5 cm in diameter. The device, whose technique has been patented, has been tested in the Mediterranean Sea and has been able to measure the dissolved gas contents up to 600 m deep. “The probe has demonstrated that it works and that it could also be used by oceanographers,” reports Jérôme Chappellaz.

In Antarctica, on the Concordia base, the envelope, that is to say the tube in which the drilling fluid circulates and where the probe and its cable will take place, was tested during the southern summers (December and January) 2013 -2014 and 2014-2015. The Subglacior probe will be installed there next summer (Austral) to begin the first tests. During the 2016-2017 season, it will be moved to a site already identified as being a good candidate to house old intact ice. The study of the past climate could thus perhaps shed light on its current developments .