Saving an ancient forest one trail mile at a time

Saving an ancient forest one trail mile at a time 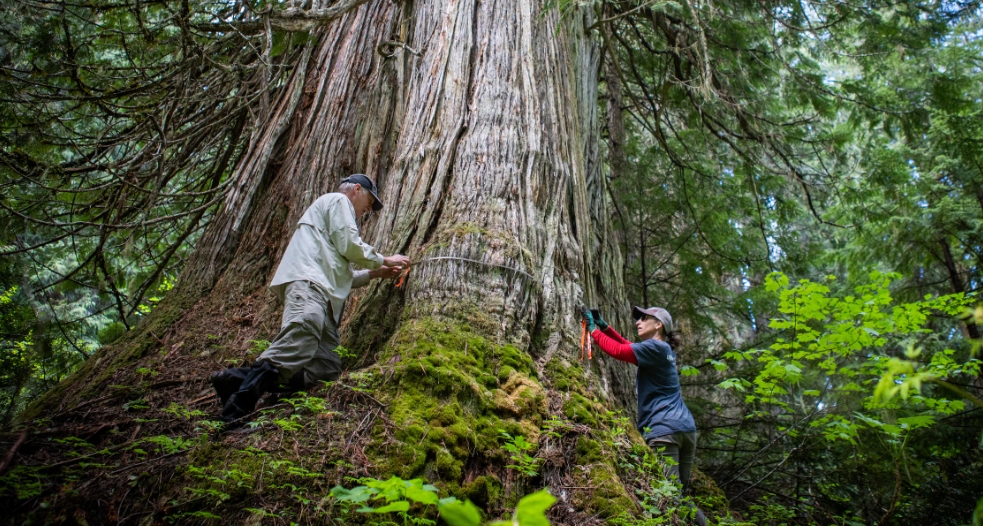 In the heart of British Columbia stands a thousand-year-old forest that still holds many mysteries: the interior rainforest.

In the hope of saving this rare ecosystem from logging, citizens have built, plank after plank, a path crisscrossing these green giants. By attracting a growing number of visitors to the forest, they won their bet. The government has declared it a protected area.

Today, Chun T’oh Whudujut Park, whose name means the oldest trees in the Lheidli t’enneh language, is a symbolic example of the citizen’s struggle against the cutting down of old trees.

With both feet on the path made of wooden slats, Nowell Senior proudly presents his work: access to one of the rarest rainforests in the world. This tree is between 1000 and 2000 years old, exclaims the retiree at the foot of a Western Red Cedar, named Big Tree.

It’s one of many, adds Mikel Leclerc, forestry engineer at Recreation Sites and Trails BC.

Thanks to their efforts, the trees around them are still standing. Because, in 2005, this part of the ancient forest was dedicated to cutting.

At the time, only the small group of hikers, nicknamed the Caledonian Ramblers, ventured into this wild forest. When they realized that these ancient cedars were going to be felled, they took the destiny of this forest into their own hands.

So we decided to trace a 15 kilometer hiking trail, says the volunteer who is part of the group.

The hikers hoped to draw attention to these giants and their importance within the community. The trail was so easy to get to that we quickly had lots of visitors, says Nowell Senior.

The latter says that this approach was not unanimous within the communities of the region who lived from the forestry industry. By tending one kilometer of trail after another, however, the volunteers managed to persuade locals to protect the forest. They saw that this place had more value with living trees than if they had been turned into a fence post, adds Nowell Senior.

Mikel Leclerc, who works to maintain and develop trails for the province, used BC forest practices laws to protect this patch by establishing a recreational area. However, it was the union of all available forces that really changed the situation.

I was very lucky because there were a lot of volunteers who were really passionate and who wanted to support the protection of this forest. As you can see, it’s magic, he says, standing amid lush greenery.

Built with local Western Red Cedar, the platform is made from the same tree that the volunteers are trying to protect. It is the most resistant wood, explains Mikel Leclerc. Thanks to the platform, everyone can come and admire these giant trees while protecting their roots.

It took 9 years of hard work to complete the platform of more than 2 kilometers, the equivalent of 18,000 hours. I think the biggest challenge was trying to entertain the mosquitoes. They were relentless, says Nowell Senior, unfazed despite the buzzing and onslaught of mosquitoes.

In 2016, the perseverance of volunteers is rewarded. No less than 12,000 hectares of forest obtain the status of provincial park.

Today, British Columbia’s newest provincial park attracts thousands of visitors from across the country and around the world.

“This is an exceptional and very important model of conservation success in British Columbia, and indeed in Canada,” — a quote from Darwyn Coxson, professor at the University of Northern British Columbia (UNBC).

However, these thousands of hectares represent only one hundredth of the interior rainforest, which extends to Revelstoke, in the southeast of the province.

Just a few miles from the provincial park boundary, Darwyn Coxson, a professor in the Ecosystem Science and Management Program at the University of Northern British Columbia (UNBC), collects lichen samples from a patch of forest that is not part of the protected area.

Slowly, he takes off from a tree a heap of material in different shades of green. Adorable! he exclaims. Gently, he places the piece of lichen in a bag. It’s actually three or more types of organisms that live together. […] it’s like a miniature community.

For thousands of years, biodiversity has accumulated both on the ground and in the canopy. More than 2,400 species of plants, lichens and mosses have been recorded in this region, says Darwyn Coxson.

“We continue to discover new species in this territory,” — a quote from Darwyn Coxson, Professor, UNBC.

Some of these organisms only grow in forests that are at least 400 years old. Without ancient forests, they are therefore doomed to extinction.

Darwyn Coxson has taken steps to request that this part of the forest be incorporated into Chun T’oh Whudjut Provincial Park. The size of the trees present is crucial information for the query.

It is an area of the province that has been poorly documented. Most of the large trees listed are on the coast, says Darwyn Coxson.

With the help of Lisa Wood, a professional forester, licensed to certify the diameter and height of these trees, Darwyn Coxson circles the tree with a tape measure.

The tree has such a circumference that the ribbon is too short to wrap around it in one go. It is therefore necessary to unroll it three times to measure it. Total diameter: 3.18 meters, announces Lisa Wood after having put all her efforts to go around the tree.

Three other imposing Western Red Cedars will also be measured in the hope of convincing the authorities to protect this ecosystem.

The Lheidli T’enneh First Nation is also part of this fight to preserve this rooted rainforest in a region where the forest industry is an economic lever.

“It’s always a bit of a battlefield. We try to protect beyond the boundaries of the park because they are not sufficient to protect this unique ecosystem,” — a quote from Karyn Sharp, Old Growth Project Manager, Lheidli T’enneh First Nation.

The First Nation plans to build an interpretive center. We hope it will be a wonderful place where people can learn about Lheidli T’enneh culture and help the community pass on its unique culture to the rest of the world.

The interpretation center should offer courses given by Aboriginal elders on the use of plants in traditional medicine, the philosophy of the nation as well as fishing and hunting techniques.

It would be a place of education and awareness beneficial to the whole community.

A glimmer of hope

These wetlands act as filters for air and water, explains Darwyn Coxson. In the context of climate change, their importance therefore increases. These places influence our quality of life. And communities in central British Columbia understood this very quickly. The quality of these places will also determine our quality of life in the future, he says.

It is also a source of inspiration for generations to come. It gives me hope for the future. This gives me hope that young people will be able to change the way they use our environment, says Mikel Leclerc enthusiastically.

This trail allows the population to get closer to this wild nature and to understand its importance on a global scale. It also represents a legacy for the residents of this community, proud to have managed to protect part of this ancient forest, one of the few that still exist in the world.

This script is part of Human Nature, a series of content that features changemakers who are positively influencing the environment and their communities in British Columbia.