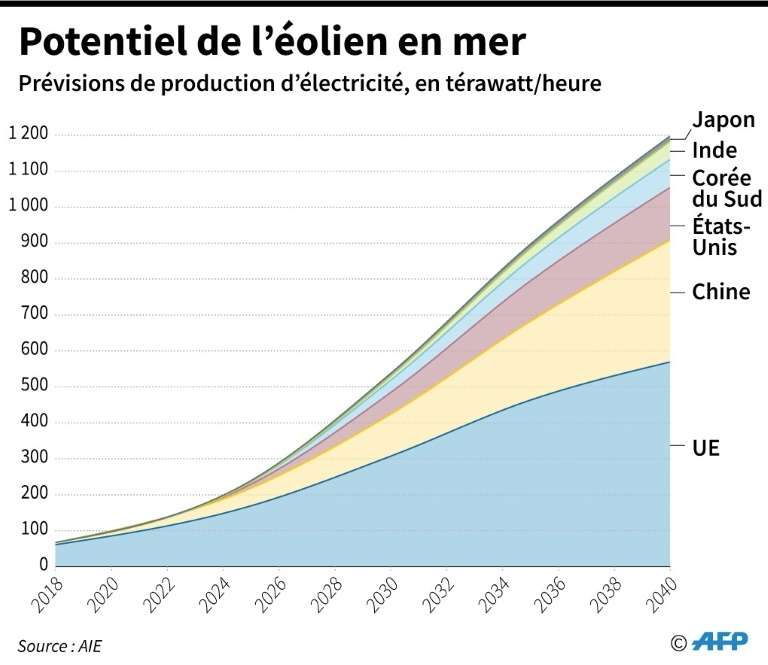 The potential of offshore wind power is almost unlimited according to the IEA, which is based on a very comprehensive report based on a geospatial analysis. Offshore wind energy production is expected to explode by 2040 around the world and could help achieve carbon neutrality by becoming the first source of electricity in the European Union, currently the leader in wind technology at sea.

“Why devote so much effort to a report on offshore wind power , a technology that today provides just 0.3% of the world’s electricity?” Because its potential is almost unlimited, “said Fatih Birol, the current director of the International Energy Agency (IEA) in a report published on Friday. Offshore wind power could see its production capacity multiplied by 15 by 2040, helping to decarbonize the global economy.

With production costs currently falling and technological progress already increasing the power of these machines, “this potential is increasingly within our reach. But much remains to be done, on the part of governments as well as industrialists, to make it a pillar of a clean energy transition”, adds this former economist. The market grew by almost 30% per year between 2010 and 2018. Over the next 5 years, 150 new parks should see the light of day.

This report, which claims to be the most complete produced on the subject, offers a geospatial analysis combining satellite data , wind studies , topographies and state of technologies, to map global potential. Result, “this potential is everywhere, in Asia, in Latin America, in certain parts of Africa, of Australia …“, lists one of the authors, Laura Cozzi, who underlines that, faced with the climatic stake, you need – “a  whole range of technologies“.

Europe, the industry pioneer (1 st wind farm was inaugurated in Denmark in 1991, and Germany and  Great Britain are now leading producers in the world), is expected to remain the engine of this growth, says the ‘OUCH. But we will also have to reckon with China, which in 2016 was the first.

In the European Union, the parks now offer a capacity of almost 20 gigawatts, a figure which should increase to 130 GW by 2040 at this stage of the measures and projects. This capacity could reach 180 GW and offshore wind will become the main source of electricity on the continent, if it wants to achieve carbon neutrality, said the IEA, which advises developed countries in their energy policy.

Editor’s note:Not all experts agree on what can be expected from wind power. There are manufacturing costs, transporting energy from the sea to the mainland, life time and recycling etc … All of which must be taken into account. Installed capacity is not the same as actual energy production in a particular year. More generally, it is good to keep in mind some ideas that are exposed by the late David MacKay .