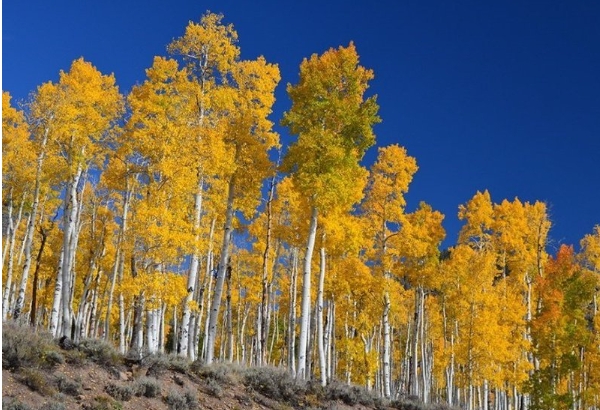 Scientists are concerned about the health of the Pando Forest in Utah, a clonal poplar colony believed to be the largest organism on Earth. Young shoots of trees are eaten by wild deer and grazing cows.

Pando Forest, also known as the Trembling Giant, is part of the Fishlake National Forest on the western edge of the Colorado Plateau in south-central Utah, about 1 mile southwest of Fish Lake. The forest occupies 43.6 hectares. It consists of more than 47,000 genetically identical aboveground aspen poplar trunks (Populus tremuloides) descended from a single underground parental clone and united by a common root system. The total weight of trees is estimated at 6000 tons, so the Pando forest is considered the largest organism on Earth by dry weight.

Such colonial organisms are not uncommon among plants and fungi, although they rarely reach such impressive sizes. Known growing on the seabed ocean plant Posidonia oceanica (Posidonia oceanica), which forms the whole underwater meadows. Widely known was the “Huge honey agaric” from the state of Michigan – the mycelium of the fine-legged honey agaric on an area of ​​15 hectares. The total weight of this organism is estimated at 40 tons. Its competitor from Oregon, the dark mushroom mycelium, covers an area of ​​​​more than 8.8 square kilometers. But more often, clonal colonies are small groups of trees, shrubs, or herbaceous plants growing side by side. Individual trees of such a colony of botany are designated by the term “ramet”. Aspen poplar clonal groups in North America are very common, but usually their area does not exceed 0.1 hectare.

The Pando Forest was identified in 1976 by Jerry Kemperman and Burton Barnes, who noted the identical characteristics of the trees. In 1992, Michael Grant, Geoffrey Mitton and Jan Linhart of the University of Colorado Boulder re-examined the forest and described it as a single organism based on the morphological characteristics of the trees. Then the forest was named Pando from the Latin word for “I spread.” In 2008, Jennifer De Woody, Carol Rowe, Valerie Hipkins and Karen Mock of the University of Utah and the University of Southampton confirmed the genetic identity of poplars.

In 2018, Utah State University researchers Paul Rogers and Darren McEvoy completed the first comprehensive assessment of the Pando Forest. They found that grazing deer (black-tailed deer and wapiti) and, to a lesser extent, cattle damage the trees by limiting the growth of new shoots. As the old trunks withered, new ones could not replace them, as they were eaten by animals. Pando was slowly dying.

The Fish Lake National Forest Administration, the US Forest Service, and the Western Aspen Alliance have responded to these threats. Part of the Pando forest was fenced in to keep deer and cows out. The current study by Paul Rogers was devoted to testing the effectiveness of these measures and predicting the future fate of the forest. The condition of the trees was assessed on 64 plots in both fenced and unfenced areas.

“Pando appears to be following three different ecological paths depending on what measures are being taken at a particular site,” says Paul Rogers. – About 16% of the area is properly fenced off from grazing animals, new poplar shoots that have successfully survived the first years are turning into new trees. But more than a third of the fences have fallen into disrepair and have only recently been strengthened. Here, there are still more old and dying trees than young ones. And in areas that remain unfenced (about 50% of the plantations), deer and cattle are still concentrated, destroying most of the young shoots. Mature trunks die off without replacement, opening up the topstory and allowing more sunlight to reach the forest floor, which changes plant composition. These unfenced areas are experiencing the fastest decline, while the fenced areas go their own way – effectively destroying this unique, historically homogeneous forest. I think that if we try to save the organism with fences alone, we will find ourselves trying to create something like a zoo in the wild. While the fencing strategy is well-intentioned, ultimately we will need to address the underlying issues of having too many deer and cattle grazing in this landscape.”