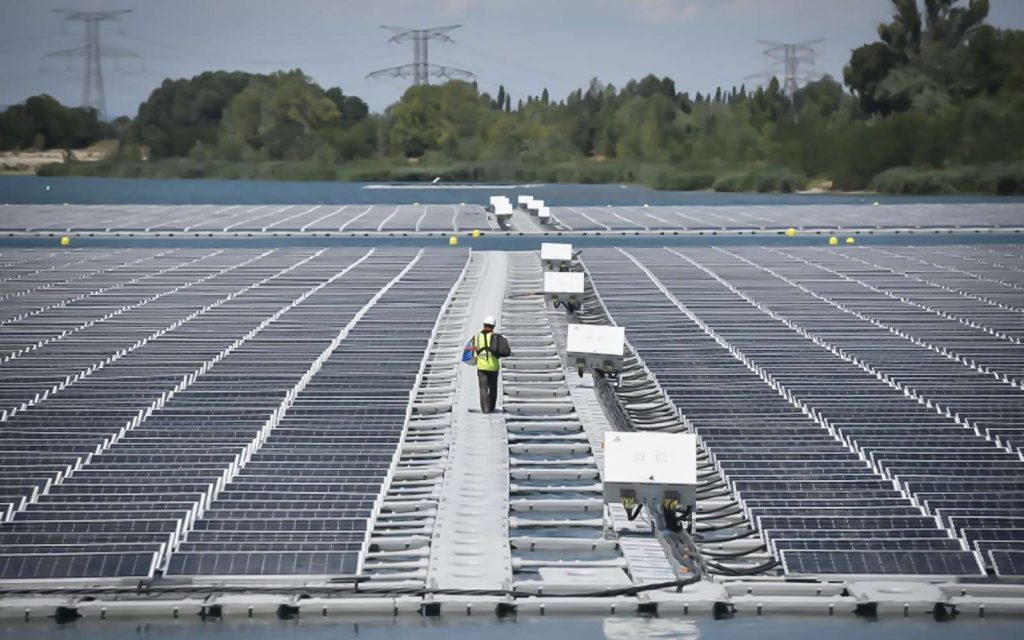 The first floating solar power plant in France will come into service next September and the 47,000 photovoltaic panels will float on the water of an old disused quarry that has turned into an artificial lake. The project will have taken ten years to materialize in the small town of Piolenc, near Orange, in the Vaucluse.

The 47,000 photovoltaic panels that float on the old quarry filled with water shine under the sun of lead: after ten years of gestation, the project of the first floating solar plant in France will come true.

At the end of a tortuous dirt road, the gaping hole of 50 hectares whose mayor, Louis Driey, did not know what to do has turned into an unprecedented project: swans and ducks navigate around the solar panels that stretch on 17 hectares of the water. O’Mega1, the largest floating photovoltaic power plant in Europe according to its designer, will go into service in September and will be able to produce up to 17 megawatts, or the annual electricity consumption of 4,700 households or some 10,000 people.

The world record held by China still remains far away: its floating solar power plant is 86 hectares (the equivalent of 120 football fields) and is equipped with 160,000 panels for a power of 40 MW. “Water is used to cool the panels and to improve the yield by 5 to 10% compared to conventional solar panels,” explains Nicolas Maccioni, director of public affairs for Akuo, the company that took over the project developed by the company Heaven and Earth, a pioneer in the field.

It all started ten years ago, when the latter came into contact with the mayor of the town who has already transformed a first body of water, dug for the TGV line, into a leisure and fishing base. “We didn’t know what to do with this space, which had to be secured to avoid accidents,” recalls Louis Driey (DVD).

The difficulty was not technical but administrative

A prototype 100m 2 power plant is installed, then enlarged to 350m 2 . Wind tunnel tests are being carried out to test the installation located in the middle of the Rhône valley, known for its strong winds, but the performance still needs to be improved. The Akuo company lightens the floats on which are placed the photovoltaic panels connected by cables to the electrical network in order to be more competitive. “There is no particular technical complexity,” says Tristan Urtizberea, project manager at Akuo, who explains that he had “the difficulties of a French first to get the authorities to accept the project”.