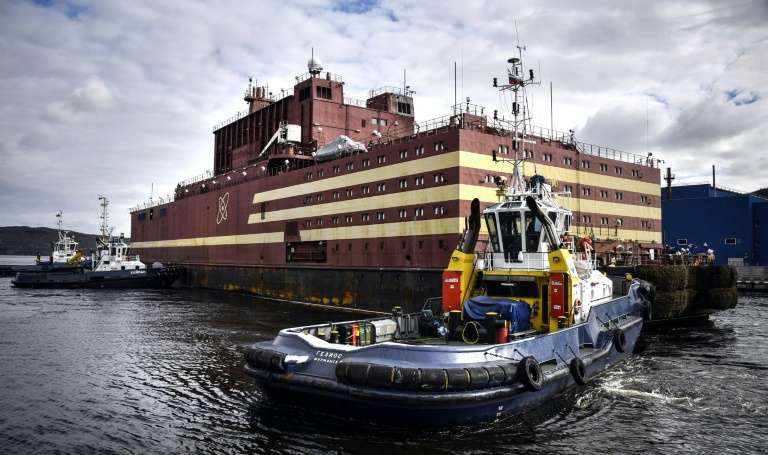 It is Russian, weighs 21,000 tonnes, is 144 meters long and 30 meters wide. It is the world’s first floating nuclear power plant, equipped with two reactors with a capacity of 35 MW each. The Akademik Lomonossov will cross the Arctic to reach its home port in eastern Siberia, a high-risk crossing and an energy choice denounced by environmentalists.

From Murmansk to the Far East, the world’s first floating nuclear power plant begins a journey of 5,000 kilometers in the Arctic on Friday, despite the fears of environmentalists regarding the consequences for this very fragile region. Aimed at fueling the development of hydrocarbon production in excessively isolated areas, the Akademik Lomonossov must leave Murmansk, a port in the Russian Far North where it was loaded with nuclear fuel, in the direction of Pevek, a small town in eastern Siberia, in the autonomous district of Chukotka.

The trip is expected to last between four and six weeks, depending on the weather and the amount of ice on the route, though the Northeast Passage – which links the Atlantic Ocean to the Pacific Ocean along the north coast of Russia – is increasingly accessible with the melting of the ice caused by global warming.

A 21,000-ton block without an engine, the Akademik Lomonosov will be towed by several ships for its voyage. The plant comprises two reactors with a capacity of 35 MW each, close to those of nuclear icebreakers, compared to more than 1,000 MW for a reactor of a conventional new generation plant .

During an AFP visit in May 2018, the barge, 144 meters long and 30 wide, which takes on a crew of 69 people at an average speed of 3.5 to 4.5 knots (6.5 to 8.3 km / h), still sported very faded brown and yellow colors. Now repainted in the colors of Russia and Rosatom, the Russian nuclear agency, the Akademik Lomonosov will not go unnoticed in Pevek, where it will be connected to the local electricity grid and should be operational by the end of the year.

Although the population of this small town does not exceed 5,000 inhabitants, the plant covers the consumption of 100,000 people and will be used mainly to supply oil platforms in the region, while Russia is developing hydrocarbon exploitation in the Arctic. The Akademik Lomonosov, whose construction had started in 2006 in Saint Petersburg before being brought to Murmansk last year, will replace a nuclear power plant, well ground this one, and an obsolete coal power plant.

Environmental associations have been denouncing this project for years and their warnings of the dangers of a “Chernobyl on ice” or of a “nuclear Titanic” take on a particular tone while an explosion in August, on a test basis of missiles in the North, gave a brief jump the radioactivity in the area. “Any nuclear power plant produces radioactive waste and can have an accident, but the Akademik Lomonosov is also vulnerable to storms,” said Rachid Alimov, of the energy department of Greenpeace Russia.

Especially since in the Arctic, the weather is extreme and unpredictable. “The barge is towed by other ships so in the event of a big storm, there can be collisions. Rosatom plans to store spent fuel on board, he  adds.Any incident would have serious consequences on the fragile Arctic environment, not to mention that there is no nuclear cleanup infrastructure there.”

According to Rachid Alimov, the Chukotka district, a gigantic region larger than France but populated by only 50,000 inhabitants, “has enormous potential for the development of wind energy and a floating nuclear power station is simply too risky and too expensive. to generate electricity.”

The idea of ​​a floating nuclear power plant, if it may seem dangerous, does not come out of the blue. The nuclear industry, which seeks to reinvent itself in the face of the gloomy market, is currently developing small, modular and cheaper reactors to attract new customers. They are inspired by shipbuilding, which has used nuclear power for a long time to propel submarines, icebreakers or aircraft carriers, and are intended in particular for isolated regions with little infrastructure.

A simpler solution than building a conventional plant on frozen ground all year round, according to Rosatom, which intends to sell its floating plant abroad.