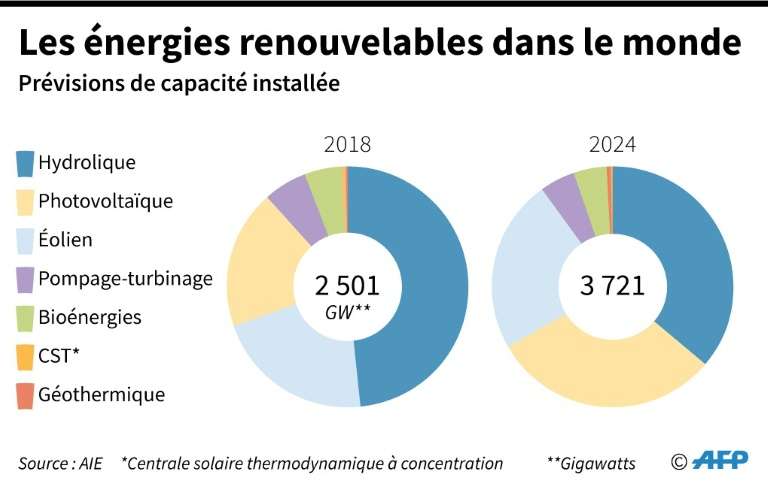 It is through small solar units that renewable energies will find their place in the sun. By 2024, the number of installations, in private homes and private companies, is expected to grow by 50% worldwide. Growth that is likely to transform the way electricity is produced and consumed, according to the director of the International Energy Agency, who points to governments disconnected from real life in the face of global warming.

The renewable energies are expected to see growth of 50% capacity in the world by 2024, driven in particular by small solar units, an encouraging leap, although it remains insufficient to replace fossil fuels , according to a report Monday from the International Energy Agency (IEA).

After a slowdown in 2018, linked to budgetary reorientations in China, the sector has started to rise again with double-digit growth anticipated by the IEA for 2019. And for the next 5 years, the agency forecasts 1,200 gigawatts of new capacities, the equivalent of the current electrical capacity of the United States from all sources. Driven by government policies and falling costs, renewables would drop from 26% to 30% of global electricity production (behind coal at around 34%). “We are at a turning point,” summarizes the director of the IEA, Fatih Birol. Solar and wind are at the heart of the transformations of the energy system”. But more effort is needed, for the climate, air quality or access to energy.

The solar PV is expected to show particularly spectacular growth (60% of the increase in renewable), with in particular an off-called decentralized installations, as opposed to large solar power plants , are placed on homes, factories, supermarkets .. thus being able to produce their own energy. In many countries, the production costs of these facilities have dropped to below the selling prices charged by electricity suppliers , making self-consumption very competitive. And the IEA expects them to decline by another 15% to 35% by 2024.

China first, then the EU, the United States, India are concerned, but also Africa and Asian countries, where they represent “a first access to electricity for around 100 million people in the next five years, ”Paolo Frankl, responsible for renewables at the IEA, pointed out to journalists.

In private homes, the number of roofs equipped should double, to around 100 million within five years – or 6% of the potential roof area available. The leaders are Australia, Belgium, California, the Netherlands, Austria. “Such meteoric growth outside the sphere of traditional energy suppliers will transform the way we produce and consume electricity,” warns Fatih Birol, however. Its development must be well managed, to guarantee revenues for network maintenance, contain the costs of system integration and fairly distribute the costs among consumers.”

Another promising sector: offshore wind power, which produces only 0.3% of the world’s electricity today. “It’s nothing at all, but the potential is huge in Europe, the United States and China,”  said Birol at a conference in Paris on Wednesday. We expect substantial cost reductions,” with an actual production rate relative to the capacity of offshore wind turbines in many cases similar to that of  natural gas plants. Hydraulics and onshore wind power should also keep an upward curve.

However, the margins for progress are immense, while CO 2 emissions from fossil fuels, by far the main cause of warming, show no sign of declining. Thus, for heating : heat from renewable sources should increase by a fifth between 2019 and 2024, with the use of green electricity , but without exceeding 12% of global heat demand , deplores the IEA.

In terms of travel, despite electric vehicles , in 2024 green electricity will only represent 10% of renewable energies used in transport (the rest coming from agrofuels , and electricity retaining a fossil origin in many countries), underlines the AIE, which advocates regulation and support measures.

“The disconnection between the statements of governments (on the climate, note) and what is happening in real life is a major concern,” notes Fatih Birol. Not to mention the possible impact of the global economic slowdown.”  There could be risks for renewables if the slowdown is severe,” said the economist. Chinese growth has been at its lowest for 30 years. Will this be reflected (…) in support measures for renewables? It is a question mark.“