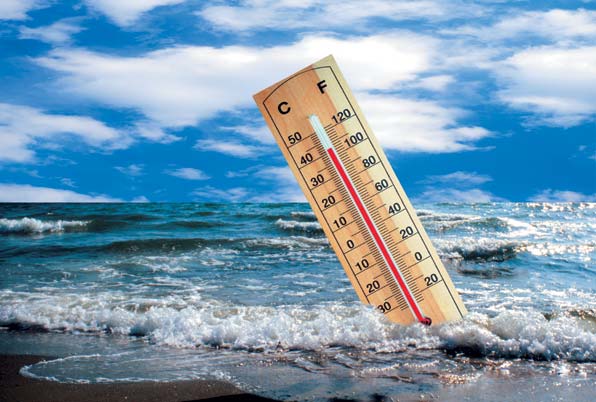 According to new research, changes similar to those after the ice age 10,000 years ago could be in store today because a warming Arctic weakens the temperature difference between the tropics and the poles. This, in turn, results in less precipitation, weaker cyclones and weaker mid-latitude westerly wind flow — a recipe for prolonged drought.

When the Arctic warmed after the ice age 10,000 years ago, it created perfect conditions for drought

According to new research led by a University of Wyoming scientist, similar changes could be in store today because a warming Arctic weakens the temperature difference between the tropics and the poles. This, in turn, results in less precipitation, weaker cyclones and weaker mid-latitude westerly wind flow — a recipe for prolonged drought.

The temperature difference between the tropics and the poles drives a lot of weather. When those opposite temperatures are wider, the result is more precipitation, stronger cyclones and more robust wind flow. However, due to the Arctic ice melting and warming up the poles, those disparate temperatures are becoming closer.

“Our analysis shows that, when the Arctic is warmer, the jet stream and other wind patterns tend to be weaker,” says Bryan Shuman, a UW professor in the Department of Geology and Geophysics. “The temperature difference in the Arctic and the tropics is less steep. The change brings less precipitation to the mid-latitudes.”

Shuman is a co-author of a new study that is highlighted in a paper, titled “Mid-Latitude Net Precipitation Decreased With Arctic Warming During the Holocene,” published today (March 27) online in Nature, an international weekly science journal. The print version of the article will be published April 4.

“The Nature paper takes a global approach and relates the history of severe dry periods of temperature changes. Importantly, when temperatures have changed in similar ways to today (warming of the Arctic), the mid-latitudes — particularly places like Wyoming and other parts of central North America — dried out,” Shuman explains. “Climate models anticipate similar changes in the future.”

Currently, the northern high latitudes are warming at rates that are double the global average. This will decrease the equator-to-pole temperature gradient to values comparable with the early to middle Holocene Period, according to the paper.

Shuman says his research contribution, using geological evidence, was helping to estimate how dry conditions have been in the past 10,000 years. His research included three water bodies in Wyoming: Lake of the Woods, located above Dubois; Little Windy Hill Pond in the Snowy Range; and Rainbow Lake in the Beartooth Mountains.

“Lakes are these natural recorders of wet and dry conditions,” Shuman says. “When lakes rise or lower, it leaves geological evidence behind.”

The researchers’ Holocene temperature analysis included 236 records from 219 sites. During the past 10,000 years, many of the lakes studied were lower earlier in history than today, Shuman says.

“Wyoming had several thousand years where a number of lakes dried up, and sand dunes were active where they now have vegetation,” Shuman says. “Expanding to the East Coast, it is a wet landscape today. But 10,000 years ago, the East Coast was nearly as dry as the Great Plains.”

“This information creates a test for climate models,” Shuman says. “If you want to use a computer to make a forecast of the future, then it’s useful to test that computer’s ability to make a forecast for some other time period. The geological evidence provides an excellent test.”